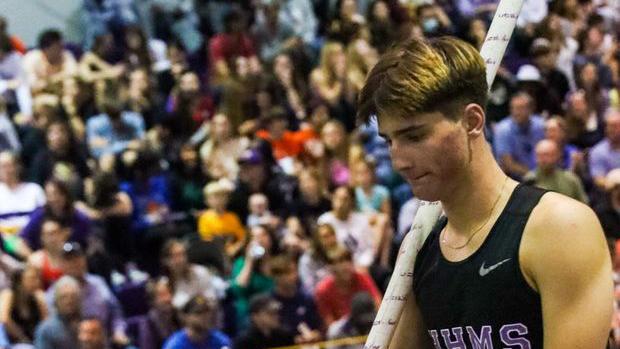 No event during the 2022 indoor season demonstrated Louisiana's ability to compete at a national level quite like the triple jump. Three Louisiana athletes are currently ranked in the top 12 in America. Two of the top four in the country live thirty minutes away from each other and compete against each other in District 2-5A.

There must be something in the water.

In a class all by himself is the No. 1 triple jumper in the nation-Ruston's Brandon Green, who separated himself at the LHSAA State Indoor Meet with a jump of 51-6.25. That is a foot and a half better than any other triple jumper in America. Green, who signed with the University of Oklahoma in the early signing period, is also ranked No. 15 in the nation in the long jump (23-5).

Thirty miles east on I-20 is the No. 4 triple jumper in the nation. Ouachita's Jeremy Nelson should get some of the credit for Green's top mark because it was Nelson who surpassed Green in the national rankings at LSU's Last Chance Qualifier with a 49-6. Green himself said he used that as motivation to compete at the highest level at the LHSAA State Indoor meet.

His coaches remarked that they could look in Green's eyes before the state championship meet and knew Green was about to do something special.

Both  Green and Nelson will go down as two of the best to ever triple jump in Louisiana and it will be fun to continue to follow both as they close out their high school career. If iron sharpens iron, these two will be razor sharp in May.

Unlike Green and Nelson, the No. 12 triple jumper in the nation, Westlake's Tristan Goodley (48-4.75), is only a junior and will look to continue Louisiana' dominance in the event after Green and Nelson have moved on to the next level.

Hammond's Beau Domingue is ranked No. 9 in the US in the pole vault with a jump of 16-4.75. The LSU signee looks to use a productive indoor season to do some big things during the 2022 outdoor campaign.

Warren Easton's Leon Elloie moves on to the outdoor season after ranking No. 12 nationally for his 6.80 in the LSU Last Chance Qualifier. He did not compete in the LHSAA State Indoor and is sure to use that as motivation as he moves into his final outdoor season.

Another New Orleans product, Edna Karr's Ra'hji Dennis won a state championship with a time of 6.85. The time ranks Dennis, who is only a sophomore, Tied for No. 25 in the nation.

On the track, the 60 meter hurdles is the event with the highest ranked Louisiana athletes. John Curtis' Justin Horne ran a 7.93 at the LSU Last Chance Qualifier. That time ranks him No. 13 in the nation.

Right behind Horne in the rankings is Scotlandville's Broderick Davis, who beat Horne for a state championship title. Davis' 8.00 ranks the sophomore tied for No. 20 in the nation.

Captain Shreve's Marquez Stevenson is ranked tied for No. 25 in the nation in the 400 meters (48.93). The junior completed his first indoor season and looks to transition to the outdoor season where he has a PR of 46.85, set at last summer's AAU Junior Olympics.