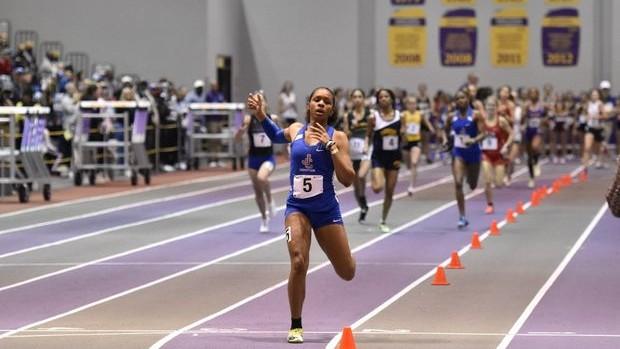 We continue our preview of the distance events for the 2022 Indoor Track and Field Championships. Today, we highlight the top girls' performers from the past season that will most likely place among the podium positions.

Naturally, first up is Lily Garrett. She has been living in the spotlight recently, but deservedly so, as she holds the two top marks in both the 1600m and 3200m for the entire state. Right now, she is one of the favorites for the 1600m in the large school division with her state lead of 5:14.42 that she ran at the very beginning of the season.

The majority of her competition garnered their best marks from the LSU Last Chance Qualifier with three other girls breaking 5:20. Out of these girls are two sophomore standouts, Jenna Key and Natalie Venkataraman. Though they are young, they are making a huge impact on the rest of the field. The other challenger entering the mix is the senior, Maddie Gardiner. The LSU commit is one of the sole returners from this event last year and may make a last-ditch effort to take home her very first individual indoor title.

In Division II, it is still a tight contingency for the title. Svenya Stoyanoff holds the small school lead with a 5:17.24, but she is not alone in this effort. Ella Segura was in that same race where Stoyanoff ran her best mark and she only finished about a second behind her. These two could be your favorite for the title, as they are the only two that have broken 5:20 this season.

What would be a race without a wild card or two? Keep an eye out for Lucy Cramer and Ava Hartman. Cramer is a seventh-grader that has proved time and time again that she is ready to run in the big leagues. She is another contender for the title, but she could be challenged by her fellow 2A competitor, Hartman. She seems to favor the longer distances like the 3200m, but that doesn't exclude her from the conversation of a podium position.

In the Division I 800m, keep an eye open for the rivalry of London Parker and Rachel Fereday. These two have gone head-to-head earlier in the season, with Fereday coming out on top, but Parker holds the fastest mark in the field. These are two veteran runners with a rap sheet of fast times behind them.

Though those two hold the two fastest times of the season in their division, you cannot possibly leave out Laila Jackson, who previously competed for John Curtis. She is the reigning large school champion in this event for both indoor and outdoor; and she has shown out at the state meet before, despite having a slow start to the season.

In Division II, Breanna Becerra returns after having her individual title stripped away from her last year. This year she returns with the state lead for the event with her 2:22.27 and looks to reclaim her title. The Jacksonville State commit holds a lead over the rest of the competition by three seconds and will be most likely to win the event.

Other capable competitors in the field are Ella Segura and Cayden Boudreaux. These two clashed at the LSU Last Chance Qualifier and Segura was able to pull one up on Boudreaux during that race just by a hair. Not to say that lightning will strike twice, but we may see an interesting fight between these two this weekend.

In the 3200m, Lily Garrett returns to the starting line in hopes to score another individual title. She is the only one on this preview that still ranks within the US Top 50, and this event looks to be her specialty. She holds the state lead of 11:03.48 and considerably outranks the rest of the field by a considerable margin.

A win in this event won't come easy to her, however, as sophomore Hudson Roberts is still within a striking range to her. Roberts lays claim to the second-fastest time in the state and could possibly make Garrett work a little harder than she may like this weekend. Other runners to look out for include teammates Emma Hendry and Grace Rennhoff who ran blazing fast times earlier in the season.

In the small school division, Ella Segura leads the charge with her leading time of 11:34.53. Much like the 1600m, this looks to be a tight race between her and Svenya Stoyanoff. These two have never faced each other in this event before, but Segura may feel more comfortable knowing that Stoyanoff will have to take the race honestly from the beginning in hopes of not being outkicked by Segura.

Other top competitors in this field come from yet another Class B school with Sophia Swinney. She has shown plenty of promise in her young age and is presented with the opportunity to find herself on the podium this weekend for the first time. Also, keep an eye out for Riley Ries. She was the 2A 3200m champion last year during outdoor and is not unfamiliar with saving her best performance for the state meet. Do not let her times fool you, this girl will fight to be on that podium.

Much like on the boys' side, the girls' 4x800m will be a race that no one wants to miss. The Divison I field is stacked with teams like Ruston, St. Joseph's Academy, and Scotlandville. These teams have run some of the fastest relays in the state's history and they will all be racing in one heat this weekend. Ruston ran the state lead two weeks ago with their performance of 9:54.59 and the other two were within 10 seconds of that. If all goes well, they may be able to threaten the indoor state record of 9:47.71, set back in 2016 by Mandeville.

Huge times dropped by Ruston, St. Joseph's Academy and Scotlandville in the 4x800m

For Division II, there are still plenty of competitive teams. Entering the state meet with the best mark is St. Louis High with their time of 10:18.54. This was an impressive performance by them earlier in the season, but they will have to look out for St. Thomas Aquinas, who solo'd their mark of 10:28.34 from the slow heat. This leaves plenty of potential for the Falcons to challenge St. Louis for the title, but it will not be easy.

Also, keep in mind the underrated team of Episcopal. Their entry time is similar to St. Thomas Aquinas, but their team is predominantly young and is still improving as they garner more race experience. This race may be the breakout moment they need.

If you haven't already, check out our mens' distance preview and make sure to watch the Livestream of the state meet this weekend.