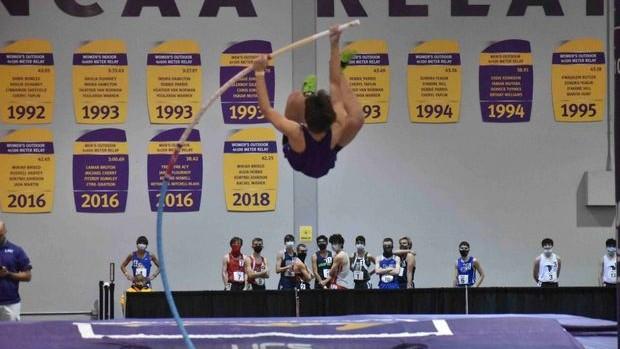 So much went down this past weekend at the Carl Maddox Field House in Baton Rouge. We saw competition from not only our home state, but others flocking in from Texas, Mississippi, and Florida as well. Naturally, there is no way to talk about each event in just one article, so today we will break down the highlights of the field events.

Firstly, we had Bryanna Craig of Ruston return to the scene in the high and long jump (that we talk about today) in which she won handedly. She won the high jump by approximately seven inches with her mark of 5-07. Finishing second to her was Danielle Lee of Ouachita with her jump of 5-00.5. These were the only two girls to jump over five feet.

Craig won the long jump by just five inches with her leap of 18-05.25. Only Destiny St. Cyr from Florida followed her over the 17-foot mark. In fact, Craig was the only contender from Louisiana that leaped over 16 feet. Bryanna Craig already sits at the US #1 for the high jump, but her long jump performance brings her up to US #25.

In the boys' high jump, the top mark was shared between two individuals, Sherman Hawkins of Tioga and Darryl George of Scotlandville. These two capped the day with a jump of 6-01.5, but Hawkins of Tioga finished on top with the least number of misses. Hawkins actually cleared that height and passed his attempts all the way to 6-06, where he missed all three attempts. He had no other misses in the competition, so it could be argued that he could have jumped much higher than 6-01.5.

In the girls' triple jump, Denham Spring's Jordyn Taylor won with a US #46 mark of 36-11.5. She edged out Florida talent, Lakesha Smith. Smith finished with a final mark of 36-07 to claim second. The next top talent from Louisiana was Simone Castelluccio of St. Joseph's Academy. She finished third with her jump of 35-10.75.

Moving on to the girls' pole vault, we have Emery Prentice of Vandebilt Catholic running away with the win. She jumped a US #6 mark of 12-07.5 and was followed not too far behind by her future teammate at LSU, Aly Jo Warren. Warren concluded her day with a jump of 12-01.5, which places her at US #11.

On the guys' side of the pole vault, there was a jump-off between four individuals. They all cleared 13-1 for their final height and all of them attempted 13-9, but none surpassed it. Jonathan Woods of St. Thomas More finished on top, followed by Justin Perault of Denham Springs for second-place. These two only had one miss throughout their attempts, not counting their final height. Finishing third and fourth are Mason Abshire of St. Louis High and Gabriel Dupuis of Lafayette Christian, respectively.

Rounding out with an event that could probably get shown some more love during the indoor season is the shot put. The girls showed out this past weekend with some astonishing throws from Jaydan Jackson of Zachary and Laila Guy of Baton Rouge Magnet. Jackson launched herself to a US #9 with her mark of 41-08.5 and Guy followed not too far behind with her mark of 40-09.25. This mark also ranks her as US #13.

For the guys', Catholic High dominated the shot put with Grant Griffin and Prince Edwards finishing first and second, respectively. Griffin heaved a mark of 51-07 and Edwards followed up with a throw of 48-07.75. Griffin handedly won, but it sure must have been even sweeter of a win with his teammate right there with him.

As we can see there were a plethora of impressive marks from this weekend, and even more impressively, it's just from the field side of competition and not taking into account the track. There were a total of ten US top 50 marks just from Louisiana competitors in the field, and there is no telling how that number will grow throughout the season.