Gabrielle Jennings.  One would be hard pressed to find a name more synonymous with Louisiana distance running since 2008.  Her final state meet was suitably a celebration of one of the most accomplished, if not the most accomplished, athletes of the past decade.  With Gabby's family gathered to see her toe the line as a member of First Baptist one last time, she ended a career that many believe tends further towards fantasy. The raw data quantifies eight brilliant years of championships and race times that entrench Gabby's name in the impressive pantheon of Louisiana's great high school prep athletes. After she said goodbye to us in the best way possible, and the way we all expected, we ought to reciprocate that privilege with a few words to put a historically brilliant career in perspective.

A quote from Gabby many readers will read or listen to is, "I told myself I was going to run with my legs and not my heart." The notion she presents likely resonates with any athlete who stepped onto the field, court, course, or track for the final time, startled to recognize the mortality of their prep or college career's existence.  Attempting to separate the physical and emotional, body and spirit, at a moment when one's internal reality intrudes itself more vigorously than ever before into his or her external surroundings is a monumental task to undertake.  Gabby succeeded initially, until the internal was wrenched out by the unlikeliest of external sources: an LSU official.  Gabby recalls, "One of the officials before the race stopped me and gave me a huge hug; he said I was something special and said it was a privilege to watch me grow, and that just hit it. As soon as I stepped on the line for the 3200, I started crying." For those of you who are unaware of the demeanor of the state meet officials, many of them are reputed as some of the most serious and intimidating men and women high school track athletes encounter. Many shy away from asking them even the simplest of questions.  An effusion of compliments from one of these individuals, which included an outward show of affection as the apogee of his praise, was no doubt surprising to the seventeen year old senior. She added, "Finishing up the last lap, the announcer said 'Well listen to this,' and they started naming everything, and it's just all of these past eight years summed up into one last lap, it was just an emotional time." The impact of the announcer's recounting of "everything," the astonishing number of state titles in each event, was visible on Gabby's figure as she crossed the finish line, burying her face in her hands immediately after finishing her longest and final race of the night. 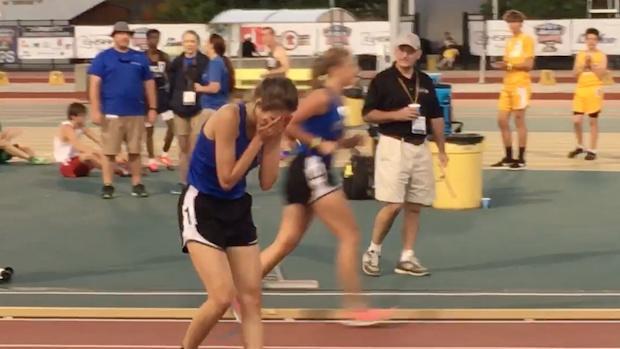 We often see outpourings of emotion from athletes ending a chapter in their careers at all levels, no matter the individual success.  Such a reaction is usually met with praise, and we ought not view Gabby's any differently. A role model for future prep starts who has achieved a level of success that a more-than-vast majority of us never have or never will have achieved in terms of accolades and times, that raw, positive data, her appreciation for the effort and growth she put forth and experienced in the time given to her runs deeper than the preposterously incredible numbers. These are qualities any athlete, at any level, can and should emulate.

It is only appropriate, then, that Gabby's grandmother described her as "unassuming" regarding her running career.  That humility and willingness to let her growth and accomplishments speak in place of grandiloquence and self-promotion refreshingly sets her apart from other prep stars, especially during a period in which television networks allocate hours of air time to broadcast countless episodes of teenagers picking up hats and debating whether or not a free college education is adequate compensation for participation in sports. One would never know from talking to her the exact number of state championships she has won (forty three, by the way), unless she is directly asked; she would discuss running, as it is a massive part of her life, but focus her thoughts almost exclusively on training and her thought processes during workouts and competition. The age-old saying that it is the journey and not the destination undoubtedly applies to Gabby, and her recognition of this crucial prioritization generates her greatness.

On what was perhaps the most confounding question of the night, one she had not anticipated and crafted an answer for weeks in advance, she revealed something about herself that many who have been following her since 2008 would not know. Her answer, however, likely comes as no surprise to any who have spent five minutes speaking to her. When asked to share with us an unknown story about her, related or unrelated to running, Gabby sifted through a few stories recalling pre-race nervousness and fiascos, but went into the interview lacking a concrete answer. If any readers have been forced to play icebreakers, perhaps the most horrible game ever conceived, you know how frustratingly difficult sharing something about yourself to numerous random individuals can be.  When finally confronted with the dreaded question, Gabby unexpectedly moved completely away from running, both proudly and somewhat shyly stating, "I'm a very creative person. I'm really involved in art. It's something that I would like to minor in, or at least dabble in, in college. I would really like to do anything creative." As one who has likely employed every possible strategy in the hundreds of races she has run, it ought to come as no shock that creativity is one of Gabby's preeminent qualities.

So, now we say goodbye to Gabrielle Jennings.  An aspiring young woman who has already established herself as an artist on the track, her next chapter will begin in the fall as a key member of the highly regarded 2016 recruiting class of Furman University, which both her father and grandfather touted, and not inaccurately so, as the "Harvard of the South." While Gabby and her family look to the future, we ought to take a few moments to look to the past at a journey that began with a young, athletic girl growing into a young woman with a future brighter than most.  Her journey is perhaps best encapsulated by an astonishing feat revealed by her grandfather, Clarence Jennings: "I've driven two thousand miles to see her run; over twenty times...That's about 50,000-60,000 miles." Like Clarence and the rest of her family, Gabby has gone the distance on a long and difficult road, and has done so in a way that all of us ought to remember for a very long time.